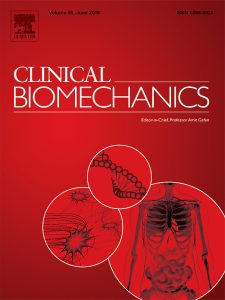 • Effects of gender and hand dominance on stiffness.

Methods: Measurements were obtained in the resting prone position on the left and right sides (initially and after 10 min rest) in 25 chronic LBP participants (16 female, 9 male) and 25 age- and sex-matched control subjects. Surface electromyography measurements were simultaneously conducted to ensure a resting state.

Interpretation: This study showed that greater median decrement was found in LBP female subjects suggesting decrease in elasticity in the lumbar myofascia. Most of the biomechanical properties differed significantly by gender. This study further documented that right-handed dominance might correlate with greater right-sided lumbar myofascial stiffness.

This study is the first to our knowledge which quantifies viscoelastic biomechanical properties of the resting L3-L4 myofascia of chronic idiopathic LBP patients and compares those properties to matched healthy control subjects. The significantly greater median decrement and stiffness measurements found in the female LBP suggest a decrease in elasticity in the lumbar myofascia in this study group which may be a result of structural alterations in this disorder. Gender comparisons revealed significantly greater stiffness and frequency values and lesser SRT and creep values in male vs female LBP and CN groups. The study confirmed greater myofacial stiffness after a 10-min rest period than initially. The increase in stiffness was significant in both genders and study groups and reflected the thixotropic nature of muscle. Additionally, greater stiffness correlated with right-handed dominance in all study subgroups, except for LBP males, which suggests that handedness may affect lower back muscle properties. This side difference was not seen in LBP males, which could be due to the smaller sample size. Further quantitative studies with greater subject participation, particularly male subjects, are needed to confirm these initial findings.