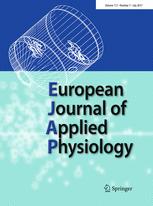 Purpose
To investigate how the viscoelastic characteristics of muscles (non-neural tone, elasticity and stiffness) vary as a function of age and gender in a sample of track and field master athletes. To compare these findings with data on related sedentary subjects in literature.

Methods
A total of 390 athletes (aged 35–99) were assessed during the European Master Athletics Indoor Championship 2016. A non-invasive measurement device called MyotonPro was used to measure tone, stiffness, and elasticity in the biceps brachii and rectus femoris muscles at rest. Linear regression analysis was used to assess the correlation between age and the measured parameters. To compare our results with previously reported data, we stratified participants according to gender and age.

Tone, elasticity, and stiffness change with aging; nevertheless, our findings suggest that physical activity can delay the effects of muscular aging, improving fitness in older people.