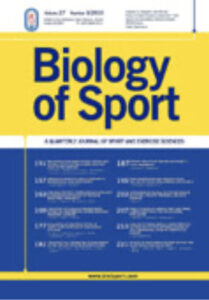 The purpose of this study was to compare the fascicle length, angle pennation and mechanical properties of the biceps femoris long head (BFlh) in dominant and non-dominant limbs in previously injured and uninjured professional football players.

Fifteen professional football players were recruited to participate in this study. Seven players had suffered a BFlh injury during the previous season. Myotonometry mechanical properties were measured in the proximal, common tendon and distal BFlh using MyotonPRO, and angle pennation and fascicle length were also measured.

We observed significantly higher distal BFlh frequency, stiffness, decrement, relaxation and creep than in the common tendon and proximal BFlh. The previously injured players showed significantly higher frequency and stiffness, and lower relaxation and creep in the dominant BFlh than did uninjured players. There were no significant differences between the fascicle length and angle pennation in previously injured and uninjured BFlh.

We describe, for the first time, reference values for BFlh fascicle length with EFOV scans, pennation angle and myotonometric values in previously injured vs uninjured limbs and in dominant vs non-dominant legs in elite professional football players. The properties of the BFlh were different in the distal region in comparison with the proximal region and the common tendon area. The previously injured limb showed higher intrinsic tension in the muscle in the resting state, higher resistance to external force that deforms the muscle’s initial shape, and a significantly reduced ability to provide a gradual elongation of the muscle over time when constant tensile stress was applied, but a similar muscle architecture. The BFlh fascicle lengths and pennation angle in elite professional football players showed no differences in previously BFlh injured vs uninjured legs or in dominant vs non-dominant limbs in uninjured players.