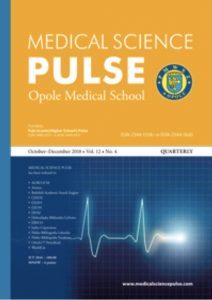 Evaluation of the influence of selected fascial techniques, based on the stecco fascial manipulation on pain sensations and reactivity of soft tissues

Background: Recent reports show that changes in fascia may be a source of many disturbances in human functioning. The concept of fascial manipulation (FM) postulates that removing the changes in ground substance of fascia re-establishes a proper tensional balance, reducing pain. Assessment of reactivity of soft tissues acts as an objective indicator, allowing for the confirmation of changes to pain levels.

Aim of the study: The purpose of this study was to evaluate the influence of therapy using the FM method on pain sensations and change in reactivity of soft tissues.

Material and methods: The research was carried out on 15 people (12 women and 3 men; aged between 18–30 years) who were randomly divided into three equal groups. Patients from the first group were treated using the standard protocol of Stecco’s method, while in the second group the modified protocol was used. The last group was the control group. All patients undergo the diagnostic process specific for FM method and had their pain level (using the visual analog scale [VAS]) and reactivity of soft tissues measured with the MyotonPRO device. Measurements of reactivity of soft tissues were taken from 10 points in pelvis (specific for Stecco’s method). All measurements were taken three times; before and after the first treatment and after the third treatment. Outcomes were gathered and inputted to the STATISTICA 12 database and analyzed using ANOVA with repeated measures and Post-Hoc Tukey’s test.

Therapy using FM method causes significant changes in some reactivity of soft tissue parameters and in pain sensations. The biggest changes were observed in the first group, who were treated with Stecco’s method.