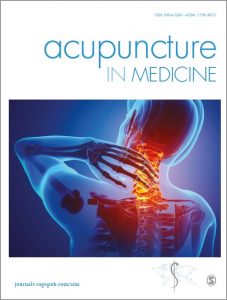 Effects of dry needling on gait and muscle tone in Parkinson’s disease: a randomized clinical trial

Background: Alterations in gait and muscular rigidity are common and disabling in persons with Parkinson’s disease (PD).

Objective: The aim of this study was to determine whether a single dry needling (DN) session can promote changes in gait and muscle tone in the lower extremities as well as in the evolution of the disease in persons with PD.

Methods: A randomized double-blind clinical trial was designed. Participants were randomly assigned to an intervention group (IG) that received a session of DN over the semitendinosus, medial gastrocnemius, soleus and rectus femoris muscles, or to a control group (CG) that received a session of sham DN in the same muscles. The effects of DN were assessed using the timed up and go test (TUG), 10 meter walk test (10MWT), 6 minute walk test (6MWT) and myotonometry before, immediately after, and 7 days after the intervention.

Results: Thirty-three participants were analyzed aged 69.9 ± 7.2 years (mean ± SD; 39% female). There were no significant differences between the IG and CG for any outcomes. Significant differences were observed when comparing the Pre and Follow-up values in the IG for functional mobility of gait in the TUG (p = 0.049), gait speed in the 10MWT (p = 0.041) and muscle tone in the lower extremities by myotonometry (frequency (p = 0.027) and stiffness (p = 0.013)). By comparison, there were no significant within-group differences in the CG.

In summary, the results of this RCT did not show any benefit of a single session of DN compared to a single session of sham DN. However, within-group changes in the IG suggested there may be increased functional mobility of gait and gait speed in persons with PD, as well as changes in muscle tone in the lower extremities. Similar intra-group effects were not seen following sham DN, suggesting these potential effects are worthy of further investigation, ideally in a larger sample of PD patients. Ultimately, the within-group changes observed were not clinically meaningful, so future studies should evaluate if more DN sessions can achieve clinically relevant effect sizes and if DN can achieve any additional effects when it is combined with contemporary treatments carried out in persons with PD.