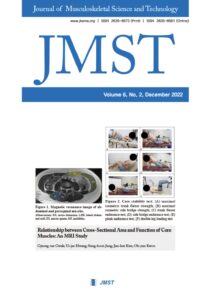 Background: Various therapeutic methods have been suggested to increase the flexibility of shortened muscles in patients with knee pain. However, no previous study has directly compared the hip joint range of motion (ROM) and muscle stiffness as a mechanical property following the active stretching (AS) and instrument-assisted soft tissue mobilization (IASTM) for shortened tensor fascia lata (TFL).

Purpose: To compare the effects of AS and IASTM on hip joint ROM and TFL stiffness in subjects with shortened TFL.

Methods: Twenty healthy male subjects with shortened TFL were selected. The subjects were randomized between the AS group (n=10) and the IASTM group (n=10). A smartphone was used to measure the hip joint adduction ROM and MyotonPRO was used to measure the TFL stiffness. Paired t-test was performed to analyze the within-group variation before and after the intervention, and an independent t-test was used to compare the between-group variation.

Our findings verified the immediate effects of the AS and IASTM in increasing the hip joint adduction ROM in subjects with shortened TFL, although the TFL stiffness was not reduced. Importantly, the increase in hip joint adduction ROM was increased to a greater extent by the AS compared to the IASTM. Therefore, our findings suggest that the AS is more effective than the IASTM to immediately increase the flexibility of the shortened TFL.