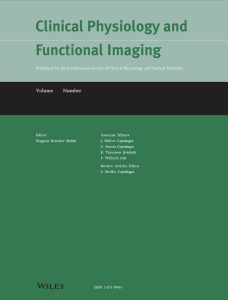 This study assessed the differences in muscle stiffness of the medial gastrocnemius (MG) and tibialis anterior (TA) muscles at rest and contraction during ovulation and follicular phase (menstruation) in women with regular menstrual cycle. Thirty-four young healthy women (mean age 21.3 ± 1.3 years) with regular menstrual cycles participated in this study. Stiffness of the TA and MG muscles at rest and voluntary contraction during ovulation and follicular phase in young women were measured using shear-wave elastography (SWE) and the handheld myotonometer MyotonPRO. The absolute stiffness difference between resting and contraction was expressed as the stiffness increase rate (SIR). The stiffness of the MG and TA at the resting position was not significantly different between the two phases of the menstrual cycle (p > .05). A significantly greater stiffness of both muscles measured using MyotonPRO in the follicular phase than during ovulation was found (p < .05), while stiffness measured by SWE showed a difference only in the TA muscle during contraction (p < .05). In addition, there were no significant differences in the SIR of both muscles between the two phases (p > .05). The results of our study showed a significantly greater stiffness of the MG and TA muscles at the follicular phase than at ovulation during contraction only. As muscle stiffness affects the risk of injury owing to reduced stability during sports activities, these changes in mechanical properties during the menstrual cycle should be noted, and training strategies should be used in female athletes.

In conclusion, this study indicated significantly greater stiffness of the MG and TA muscles in the follicular phase than ovulation, when the muscle is contracted. As muscle stiffness affects the risk of injury during sports performance, health professionals or athletic trainers should be aware of the changes in mechanical properties during the menstrual cycle at the tissue level, and use training strategies or effective exercise regimes to prevent injuries during sports activities in female athletes.