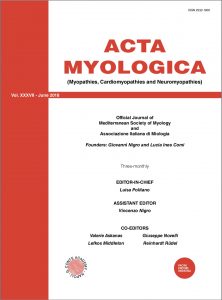 23Na MRI and myometry to compare eplerenone vs. glucocorticoid treatment in Duchenne dystrophy

In this pilot study we tested whether a low dose application of a mild diuretic substance such as eplerenone is beneficial in early stages of Duchenne muscular dystrophy using 23Na und 1H imaging, myometry, and clinical testing versus the glucocorticoid gold standard.

Two 7-years old patients with DMD were examined on a 3T MRI system. 1H MRI and 23Na density-adapted 3-dimensional radial MRI sequences were performed both before and 1, 3 and 6 months after therapy with eplerenone respectively cortisone. We quantified fatty infiltration on T1-weighted images using subcutaneous fat as reference and fat fraction with a two-point DIXON sequence. Muscle oedema was quantified on STIR images and DIXON water maps with background noise as reference. We quantified Na+ by a muscular tissue concentration sequence with a 51.3mM Na+ with 5% agarose reference tube. A Na+ IR-sequence was used for determination of mainly myoplasmic Na+. Correspondingly myometry of muscles and tendons were assessed. Clinical tests (i.e. 4-steps-test) and blood counts (i.e. K+) were done by a pediatrician.

Under eplerenone therapy we detected a reduction of muscular oedema, intracellular-weighted sodium IR signal and muscular sodium concentration. The oedema reduction in the DMD patient receiving eplerenone was more pronounced to the patient with cortisone. Myometric-measured tissue parameters such as muscle stiffness had a more pronounced effect in the child treated with eplerenone after a first increase in muscle stiffness both after eplerenone and cortisone treatment. Clinical abilities during both therapies were mostly constant.

Eplerenone might be a possible new therapy option in DMD patients.

In conclusion, according to our data we observed in our patient treated with eplerenone a cortisone-comparable tissue effect over 6 months of medication on MRI and myometry. Therefore, further trials with larger patient numbers need to demonstrate whether (in the long term) eplerenone should be regarded as a possible new therapy option in DMD patients.